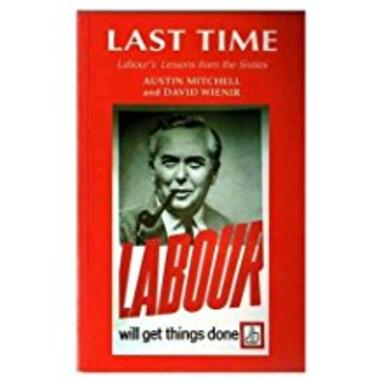 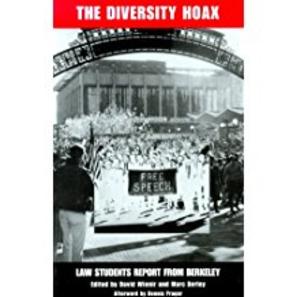 BY: DAVID WIENIR AND MARC BERLEY

FOUNDATION FOR ACADEMIC STANDARDS AND TRADITION (1999)​

THE DIVERSITY HOAX is a book about diversity on campus, written by those who know it best – students. These essays by UC Berkeley law students from across the political spectrum offer hopeful solutions to an important problem in higher education today. They will motivate students nationwide to start exercising their right to free speech and express their diverse opinions on various topics, including what “diversity” really means. 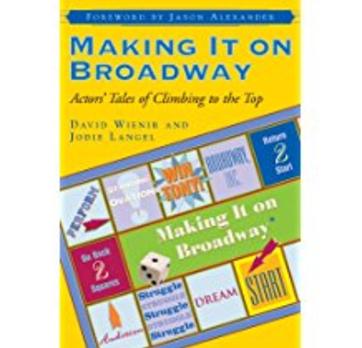 "This book is one of insight and delight to anyone who has reason to walk through the doors of a Broadway theater...If you dream of working on Broadway, this book will help to prepare you for what it takes to 'make it,' maintain it, and go on loving it. If you live to see a Broadway show, this book will give you insight into the joys and struggles that go into serving you, the audience." JASON ALEXANDER - Tony Award Winner and star of Seinfeld

"If you think working in theater is glitzy and ritzy, you've gotta read 'Making It on Broadway.' It's a heartbreaking, humbling, and hilarious look at today's Great White Way, told by pros who know every stage of showbiz." WAYMAN WONG - New York Daily News and Playbill.com

"The Broadway performers reporting in this devastating multiple-memoir on the real life of actors are hilarious, grim, rueful, resigned, even forgiving, but somehow, in every mood, their recollections are inspiring and transparently honest. Loving intensely what they're looking for, and even looking for it in what should be the right place - Broadway - they're pretty much shocked by the reality. But like saints and lunatics, they never lose the vision, see it as real, and sometimes, even for a moment, find it. When you start out in New York with little money, and with rats in the walls of a closet you're supposed to think of as a whole apartment, it is not, God knows, any part of the dream that got you there. And then, when you find out later that life after 'making it' is not all that different, and certainly not different enough - there's reason to be discouraged. But like a torturous love affair, there is, after all, at the bottom of it, love. So, if this book is a warning, it is also PR for a hard, still proud, way of life." LEON KATZ - Emeritus Professor, Yale School of Drama

"How is a life in the theater possible when 'making it' is a false concept and 'Broadway' is no one's permanent address? This book is a wise, uncompromising, and invaluable document, featuring the passionate voices of those wrestling with the question and living the answer. Long live their history!" MEL SHAPIRO - Head of Acting and Musical Theater, UCLA

"Usually, when you climb to the top of the beanstalk, you discover a giant monster. This book describes that trip up, and what’s there when you arrive. Some of the contributors to this book were once told what life would be like once they finally 'made it' on Broadway...but they didn’t believe it. Now, the actors in this book tell it like it is - they destroy the myths and inject the truth. Yet, will it discourage any young artist? Not likely." ARTHUR BARTOW - Artistic Director, Undergraduate Department of Drama, NYU Tisch School of the Arts

Is New Labour a genuine attempt to learn from the failures of old Labour, or another advertising gloss for an old product? That's the question posed by this fascinating study of the successes and the failures of last time - when Labour took office in circumstances similar to today's. It's now a third of a century since the British people last threw out a faltering Tory government to bring an exciting new Labour Party to power. In 1964 a modernizing Labour Party, led by its dynamic new leader, Harold Wilson, won power in a long delayed election victory and set the country on a new course. The parallels between last time and Labour's progress to power are striking.

In this book those who played the key roles in Labour's great election victories of 1964 and 1966 describe their techniques for winning, the way in which Labour governed dynamically on a small majority to build up support and win its biggest majority since 1945, and the key role played by Harold Wilson as an energetic, modernizing leader who brought Labour back into tune with the national mood, led it to victory - but then threw it all away. Last Time chronicles Labour's triumphs and failures from the sixties. It shows how the great victory turned sour in the face of economic difficulties and how Wilson failed to seize the moment to ensure the economic growth on which Labour's success depended, then as now. In four years of the nineteen sixties Labour went from triumph to tragedy. This book chronicles that dramatic process, in the words of those who took part, to point out the lessons for New Labour so it can avoid the mistakes old Labour made in the sixties.

AN AMERICAN'S JOURNEY INTO THE RED LIGHT DISTRICT

BY: AUSTIN MITCHELL, MEMBER OF PARLIAMENT,

MAKING IT ON BROADWAY: ACTORS' TALES OF CLIMBING TO THE TOP

BY: DAVID WIENIR AND JODIE LANGEL

Countering the misperceptions about Broadway performers leading glamorous lives, the words of more than 150 Broadway stars provide unprecedented insight into their struggle for stardom. With an introduction by Jason Alexander and candid interviews with today's most celebrated Broadway stars, this book offers stories to entertain and astonish theater lovers, as well as serve as a sobering reality check for those considering careers on the stage. This book shares firsthand accounts of professional actors' difficult yet fulfilling journeys to Broadway: moving to New York, finding survival jobs, auditioning, landing roles, avoiding pitfalls, forging a family life, and much more.

"David Wienir, Marc Berley, and the contributors to The Diversity Hoax are profiles in courage." -- Dennis Prager, author of Think a Second Time and Happiness Is a Serious Problem, syndicated radio talk show host (KABC)

"The publication of The Diversity Hoax shows students aren't going to acquiesce to such tactics anymore." -- Forbes

"This fascinating and powerful collection of thoughtful young voices is eye-opening even to those versed in the machinations of diversity in higher education. It is a book of experiences more than abstractions, and it opens us to the inner lives of those usually too young and too busy to speak for themselves. I was disturbed and yet also moved as I read the stories of people so young already fighting so hard for their integrity. No one can read this book without admiration for its writers and horror at the situation they find themselves in. There is no other book like it." -- Shelby Steele, author of The Content of Our Character and A Dream Deferred: The Second Betrayal of Black Freedom in America

"The Diversity Hoax is required reading for anyone concerned about legal education in America. These intriguing essays show how the illiberal orthodoxy of "political correctness" is stifling debate at an institution that should be an open marketplace of ideas. By describing the problem so clearly and candidly, this excellent book may be the beginning of its resolution." -- Edwin Meese, III former U.S. Attorney General, Boalt Hall Alumnus